Start a Wiki
Katsuki Shima (志麻賀津紀, Shima Katsuki?) is a minor character of the Clannad anime and visual novel. He only appears during Misae's arc, which explains the events which happened to her some years prior to the beginning of the Clannad storyline. He was Misae's boyfriend for a while. He is described as being a bishōnen, a fact which Saki and Yuki make use of to dress him up as a girl.

During the main Clannad series, we can see a cat often accompanying Misae. He often stays with Tomoya whenever he visits Sunohara in his room.

It is revealed that Katsuki is a boy who Misae met in the past while he was in a wheelchair in the hospital. Her kind words encouraged him to recover. Years later, he searches for her with the hopes of paying her back. He holds a charm which contains a light that can grant a single wish. Misae considers him annoying since he is constantly following her around. She doesn't want him to feel indebted to her and tells him she doesn't want anything. However, she gradually comes to care for him. After a misunderstanding during which she realizes that her crush, Igarashi, doesn't like her back, she starts liking Katsuki after being comforted by him.

Yuki and Saki later ask if they can hang out with Katsuki at his house, since Misae is busy as the newly elected council president, but as they are walking, he realizes he can't remember where his house is. They eventually find the Shima household, where Katsuki's mother greets them asking if they want to light some incense in his memory. Katsuki then remembers the truth and runs off. We discover that he is not the real Katsuki Shima, because the real Katsuki died, but not having been able to thank Misae and grant her wish, he entrusted this mission to his cat, who took a human form.

After enjoying some time with Misae at the Fall Festival, he brings up the issue of the charm and opens it, revealing it to be empty. Misae says it doesn't matter and that what's important is that they are together. She then wishes for Shima to always love her, and then kisses him. He tells her he also loves her and thanks her for all the happy memories she gave him while sobbing. Embarrassed, she goes to buy some drinks, but when she comes back, he has disappeared. She searches for him only to see a flash of him in the crowd whispering her goodbye.

Sometime later, a cat started following Misae and she took him in. This cat is revealed to be the very same cat that Katsuki entrusted, who has remained by her side in fulfillment of her wish. Misae only discovers this later in After Story, when she is told by Tomoya after the cat showed him the story in a dream. Misae says she can't have a date with a cat, but scoops him into her arms and walks away with him. This releases her light orb, and we can see the cat addressing his master, the real Katsuki, and wondering if he properly fulfilled his job, wanting to stay this way forever.

Katsuki in his cat form as seen in The Season You Were In.

Real Katsuki Shima who is no longer

Katsuki on a date with Misae

His last appearance as a human 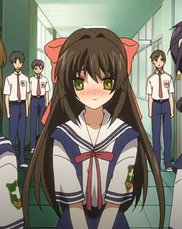 Katsuki Shima dressed as a girl to go the student council room and see Misae working
Add a photo to this gallery
Retrieved from "https://clannad.fandom.com/wiki/Katsuki_Shima?oldid=16692"
Community content is available under CC-BY-SA unless otherwise noted.