"So my... my bread is..."
—Sanae saying it to Akio, or Tomoya after hearing stuff of them insulting her bread before running off in tears.

Sanae Furukawa (古河早苗, Furukawa Sanae?) is the wife of Akio Furukawa (whom she runs a bakery named Furukawa Bread with) and the mother of Nagisa Furukawa.

Sanae is a beautiful woman with wavy hip-length light brown hair that is usually tied into a low ponytail using a periwinkle bow that slightly resembles a butterfly, amber eyes and three "hair antennas" protruding from the top of her head.

When Sanae was a middle school teacher, she had back-length hair, and she still had her bow. Instead of a low ponytail, a small section of hair at the back of her head was tied.

Like all the Clannad characters, Sanae has bangs and hair covering her ears.

Normally, Sanae is a very childish woman who is shown to be a cry-baby, especially when someone insults her bread, but, when needed, she can be very strong-willed and dependable that she often conceives of strange concepts to make bread, which when attempted prove inedible and are never sold, except for a few people that buy it out of pity.

One of the series' frequent gags consists of Akio Furukawa making a negative comment on Sanae's bread while unaware of her presence, causing her to run off with tears in her eyes, and Akio stuffing his mouth with her bread and saying he loves it, as he chases behind her.

She also tutors children in the Furukawa Cram School and she's quite proud of the way people often mistake her for Nagisa's older sister because of her youthful appearance. This can be seen in the Sunohara siblings arc, where she poses as Youhei Sunohara's girlfriend and no one suspects that she is actually an adult.

Sanae plays a larger role in the After Story arc, often coming to Tomoya Okazaki's aid when Nagisa is ill and needs to be accompanied, especially during Nagisa's pregnancy. Before being a baker at the Furukawa Bakery, she was a junior-high teacher but had to quit her job due to Nagisa's health. After claiming she could bake, they decided to open a bakery, but in the end, Akio is the person who does most of the baking. She is the one, together with Akio, who cares for Ushio Okazaki during the five years after Nagisa's death. She seems to be quite strict with her, but this is just to show her that there is nothing better than being with her father. Sanae is the mastermind behind Tomoya and Ushio's trip to the flower cape, in hope for them to reconcile. She knows Shino Okazaki, Tomoya's paternal grandmother; however, it is never revealed how they met.

In her arc in the visual novel, her cram school was about to be closed down because of the opening of a new one nearby, but in the end, the children decided that they still wanted Sanae to tutor them and they manage to avoid the closing down of the Furukawa Cram School.

Sanae running off in On the Hillside Path Where the Cherry Blossoms Flutter after being told her bread is a failure.

Sanae dressed up as Youhei Sunohara's imaginary girlfriend in the After Story episode Search for Fake Love. 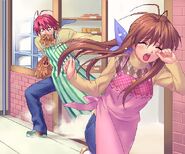 Retrieved from "https://clannad.fandom.com/wiki/Sanae_Furukawa?oldid=16901"
Community content is available under CC-BY-SA unless otherwise noted.