Sugisaka appears in the anime as a cameo in The Girl Genius' Challenge. She was with the other members of the Choir Club when Kotomi came in and saw the violin in Rie's hands. Like everyone else, Sugisaka covered her ears when Kotomi played and dropped down when she stopped.

She appears again in Stuck Problem when Nagisa asks the Choir Club if they could have Koumura as their advisor. Sugisaka actively refuses, and even threatens to hurt Nagisa if she tries to establish the Theater Club. Youhei, Tomoya and Nagisa eventually confront her after school. Sugisaka later explains that Rie used to play the violin well when she was little but got into an accident. She couldn't play the violin well ever since. When Rie went to high school, she and her friends formed the Choir Club since Rie always looked lonely, and because Rie could still sing. She then begs Nagisa to not get in her way, but Youhei calls Sugisaka a cheater for trying to get their sympathy. Nagisa doesn't listen to Youhei and tells Sugisaka to go on with the Choir Club.

She appears with Rie and Harada in 3 on 3 to watch Youhei, Tomoya and Kyou go against the Basketball Team. When Tomoya and the rest won the match, Sugisaka relented and reached a compromise with Nagisa: they would share Koumura as an advisor for their clubs.

Sugisaka makes another cameo appearance in Two Shadows when the Choir Club is seen performing for the school festival.

In Graduation, Sugisaka, Rie and Harada attend Nagisa's graduation. In In the Remains of Summer, she is seen working with Rie and Nagisa in a family restaurant. She and Rie later make a cameo appearance in Small Palms.

She is last seen living with Rie in an apartment.

Sugisaka, Rie, and Harada, the third member of the Choir Club, watching the basketball match during 3 on 3.

Sugisaka working in a family restaurant in A New Family.

Sugisaka (left) and Rie five years after the events of Clannad. 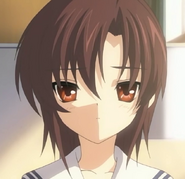 Add a photo to this gallery
Retrieved from "https://clannad.fandom.com/wiki/Sugisaka?oldid=16646"
Community content is available under CC-BY-SA unless otherwise noted.